Across the world we are experiencing an ageing population, leading to growing concern regarding the costs of pensions, health and social care. However, longevity is about more than just end of life issues and is already having a profound social and economic impact across all ages. Here are ten facts aimed at helping you understand how longevity is already changing the way we live our life. 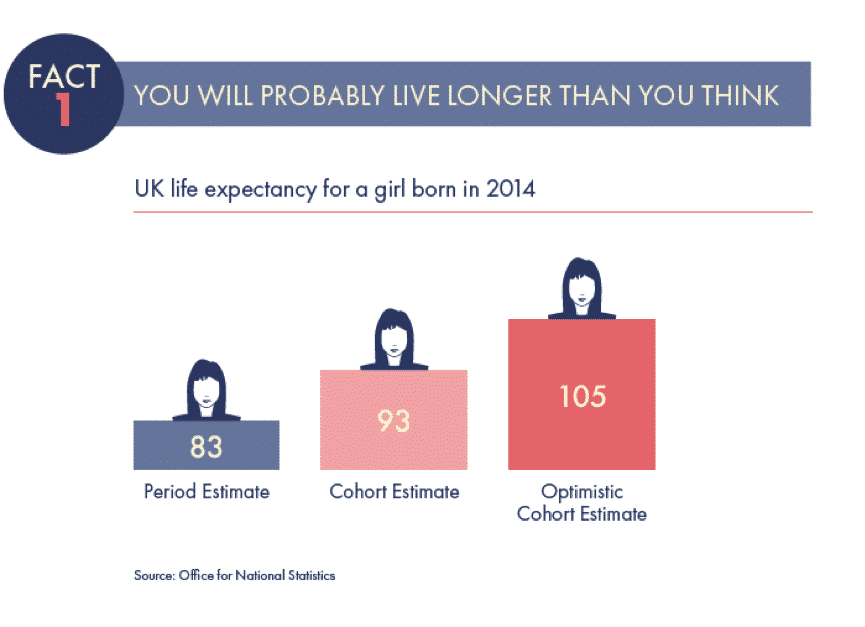 The UK’s Office for National Statistics (ONS) predicts a girl born in 2014 has a life expectancy of 83 and for a boy 79. However these predictions are based on the assumption of no further progress in improving life expectancy. Given over the last 150 years best practice life expectancy has improved by two to three years every decade that’s a strong assumption. Allowing for modest rates of future progress the ONS predicts a new born girl will live to 93 and a boy to 90. Assuming progress continues at its past rate then these become 105 and 102. 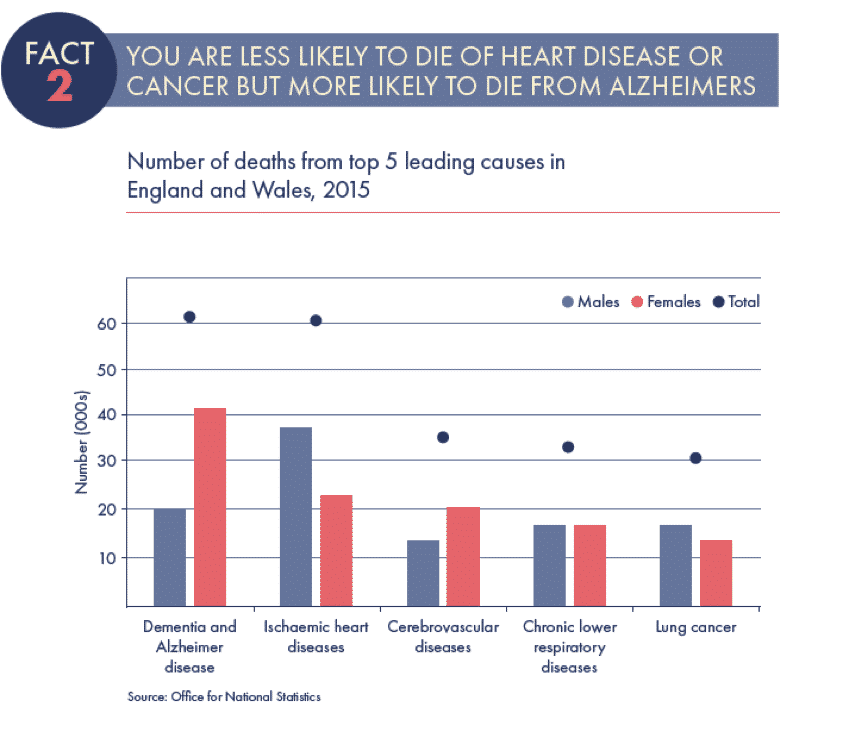 Between 2001 and 2015 the chances of a man dying from heart disease declined by more than 50% and the risk of dying from cancer also declined. For men aged 35-49 the most common cause of death is now suicide not disease.

However as we live longer we are becoming more likely to die of other diseases such as Dementia. The number of deaths from Alzheimers increased threefold between 2001 and 2015 making it the lead cause of death in 2015.

Because mortality rates have fallen more and more people are reaching the age of 100. In 1990 there were an estimated total of 95,000 people aged 100 or more across the world, the equivalent of 2.9 people out of every 10,000. Current estimates suggest that the number of centenarians has increased nearly fivefold and by 2050 more than 3.5 million people will have enjoyed a 100th birthday party – that’s around 24 people out of every 10,000.

The oldest person to have lived (or to have been verified) is Jeanne Calment of France who lived to be 122 years and 164 days old, passing away on the 4th August 1997. The oldest person alive today is Violet Brown of Jamaica who is 117 years old and 80 days.

Despite all the improvements in life expectancy over the past 20 years Mme Calment still holds her title as the oldest person ever to have lived and will do so for at least a further five years. This leads many to believe that there is a biological limit to how long we can live for.

Saying there is a limit to life expectancy is not uncontroversial. Increasing research and investment is being made into understanding ageing itself. In 2018 the WHO meets to update its International Classification of Diseases. There is growing pressure to include ageing as a disease, opening up the logical possibility of curing ageing and removing mortality.

The next person to live for longer than Jeanne Calment will receive a very substantial birthday present. Dmitry Kaminskiy of Deep Knowledge Ventures has promised a $1million prize for the first person to live to 123 years of age. 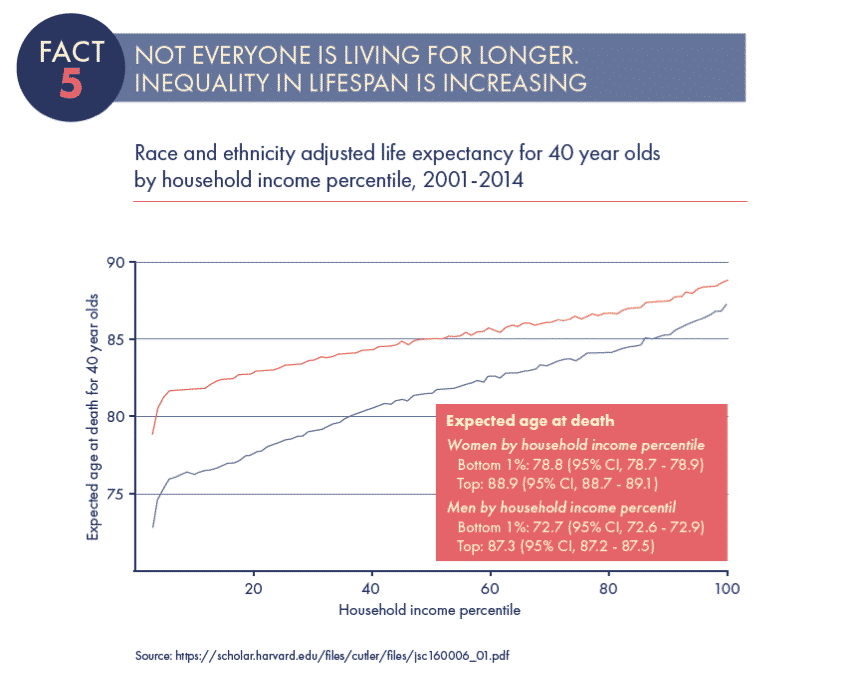 Whilst average life expectancy has been increasing the gains have not been equally spread. A US study based on 1.4 billion tax records suggests that the gap in life expectancy between the richest 1% and the poorest 1% is 14.6 years for men and 10.1 years for women. This gap has been widening over time –between 1980 and 2010 the gap has increased by 8 years[1].

To compound matters it isn’t just that the gap is widening but for some groups life expectancy is falling. Anne Case and Angus Deaton show that for non-Hispanic white men and women in the US without a college degree and aged between 25-29 and 60-64 mortality rates are rising even though they are falling for everyone else. The declines in this group may contribute to explaining why in the last two years US and UK life expectancy have shown very small declines. Whilst best practice life expectancy continues to increase not every country is implementing best practice. 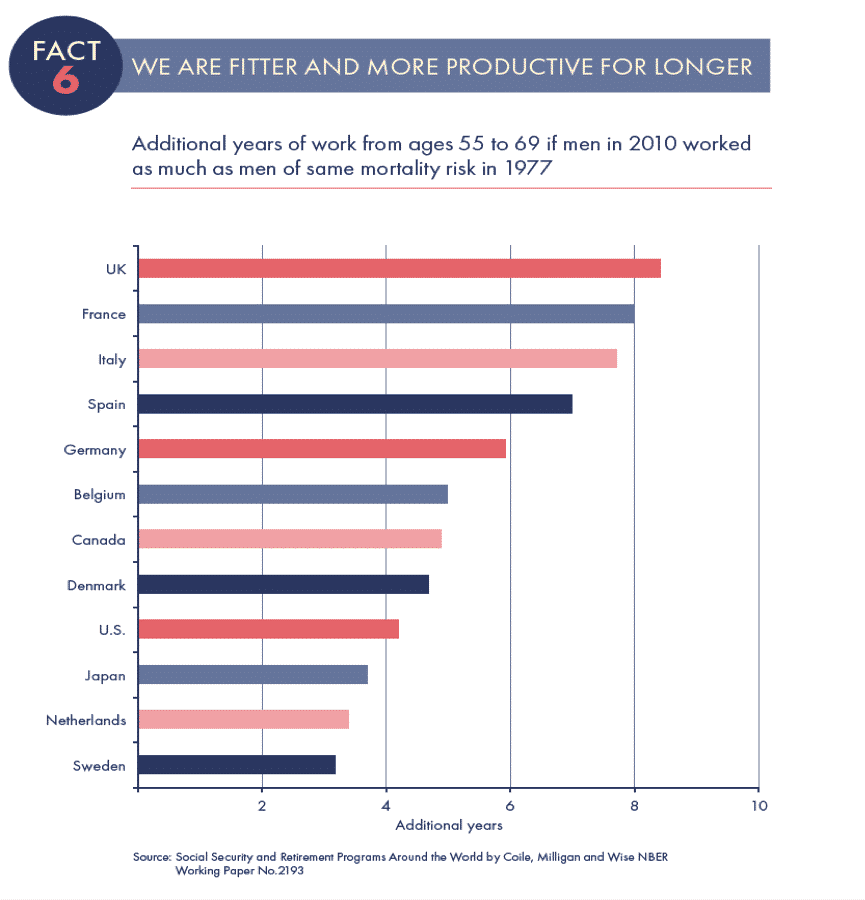 The general perception of longevity is that it means we are older for longer. However in many respects what is happening is that we are actually younger for longer.

The answer is that for the UK people would be working an additional 8 years longer, for Germany an additional 6 and for the US 4. Having people work for longer will be crucial in solving the public finance challenges around longevity. However achieving these extra years of work will need a radical overhaul in corporate policies and approaches to older workers. 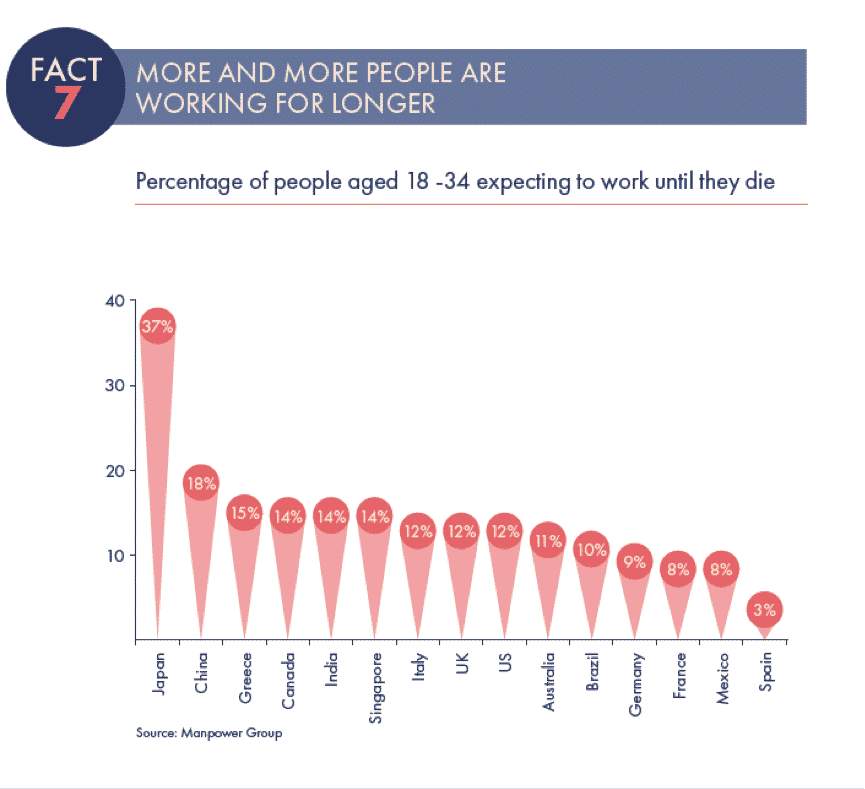 The younger generation seem to be factoring this into their life plans. According to a survey by Manpower Group 37% of Japanese millennials expect to work until they die as do 12% of British and American 18-34 year olds.

There is some good news in this though. Especially in less physically demanding jobs working until later is correlated with longer life expectancies. A study by Oregon State University of nearly 3000 individuals who retired between 1992 and 2010 shows that those who retired at 67 and not 65 had a 21% lower risk of dying at 67. For those who worked until 70 the risk fell by 44% and retirement at age 72 saw a 56% fall in probability of dying compared to retirement at 65. 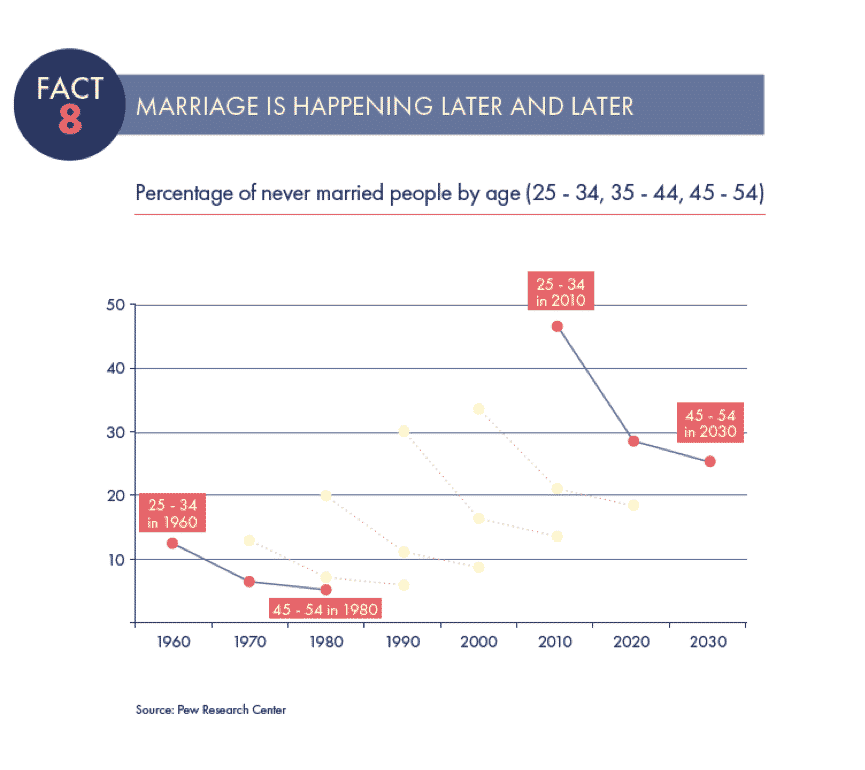 Marriage is happening later and later and increasing numbers of people never marry. In 1970 only 5% of Japanese were never married by age 50, by 2010 this had risen to 16%.

It isn’t just the age of marriage that is being pushed back. In 1975 90% of 30 year olds in the US lived on their own, today it is 70%. In 1975 56% of them owned a home, today it is 33%. There are many factors, positive and negative, behind these trends but as life expectancy has increased so too has the age at which the traditional markers of adult commitment are made. 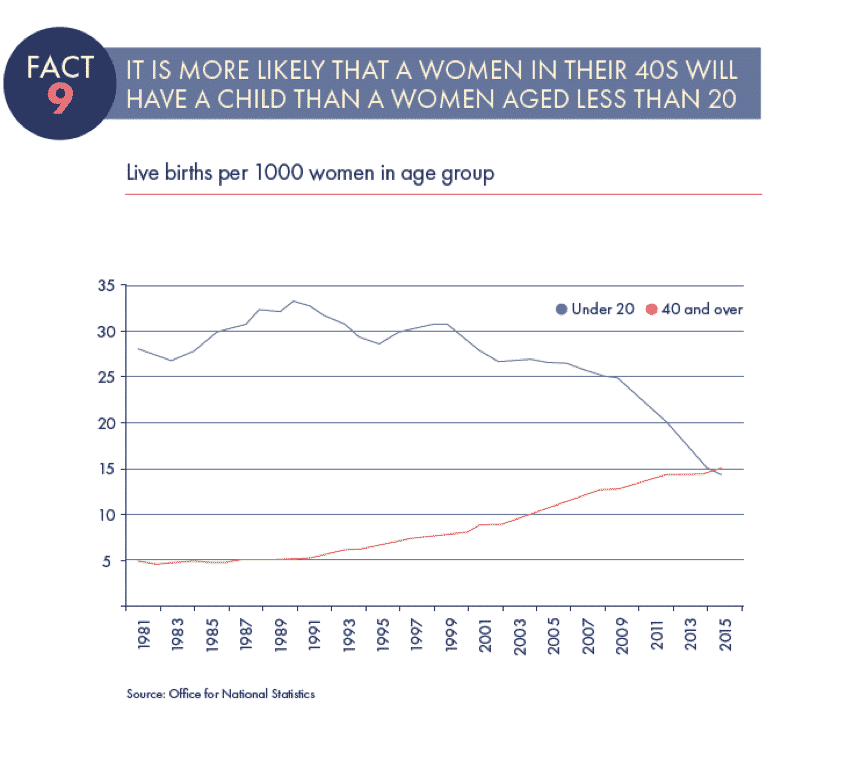 As well as marrying later and buying houses later, people are having children later. The average age of women when they give birth in the UK has risen since 1975 and is now just over 30. Fertility rates for those aged over 40 are now greater than those under 20. A woman in their early forties is now more likely to become a mother than a grandmother. 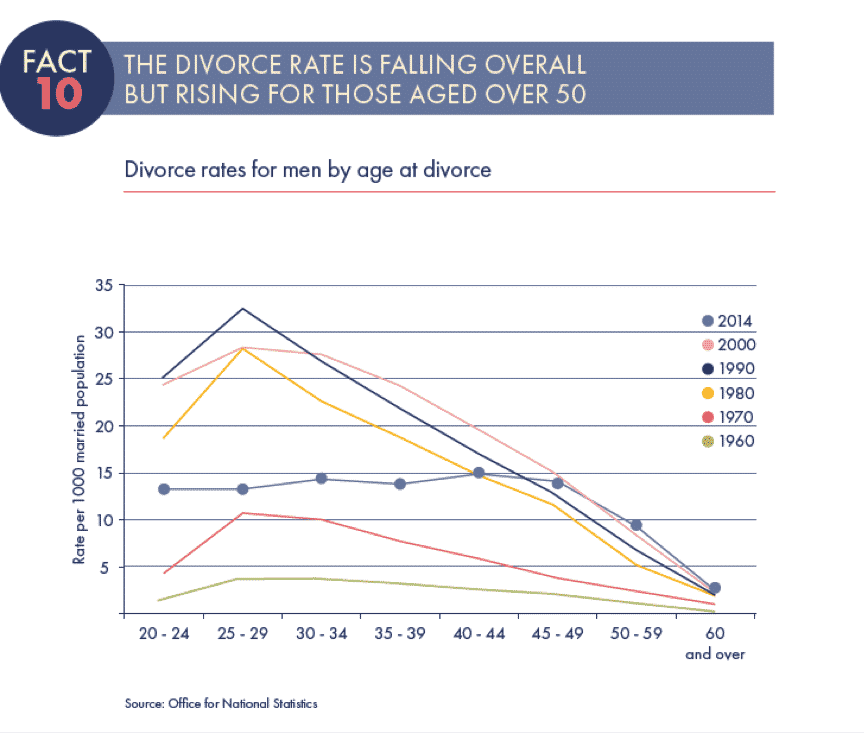 Divorce rates on average are declining. The divorce rate in England and Wales rose continuously from 1960, when it stood at 1.3 per 1000 married men, to reach 25 in 1990 but since then has shown a substantial decline to 13.1. However declines in divorce are focused on the under 50s, for those over 50 divorce rates continue to rise and there are even specific dating apps such as “Stitch” to cater for this age group. Also noticeable is a shift in the most likely age for divorce. Even as recently as 1990 this was between 25-29 but by 2014 it had risen 40 to 44.

Andrew Scott is a Professor of Economics at London Business School and the author (with Lynda Gratton) of “The 100 Year Life – Living and Working in an Age of Longevity”. You can find him at  www.andrewscott.global or on twitter @ajslondon1. 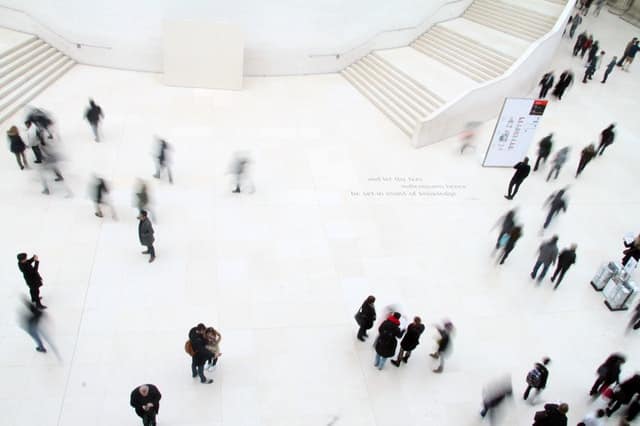 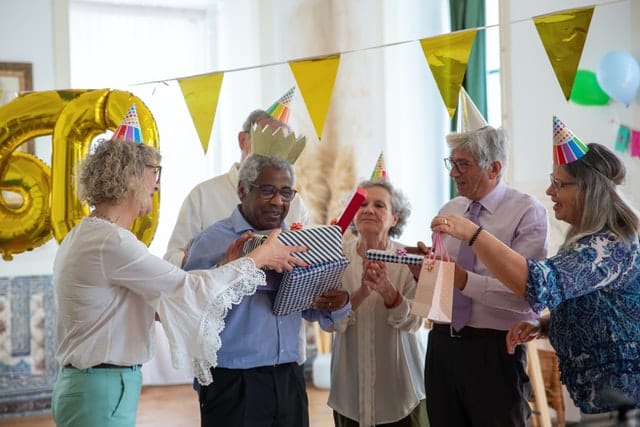 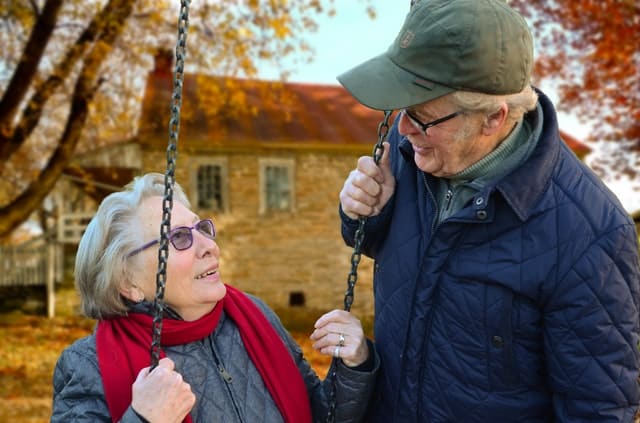 Projet Syndicate: A Global Institution for an Aging World 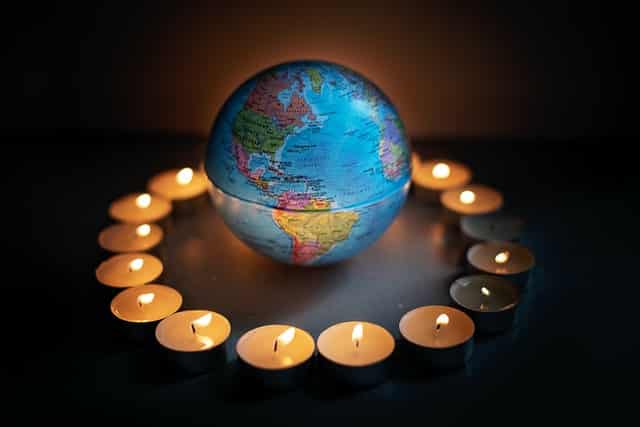 LA Times: Why we need a global institution for an aging world “Government Debt : The long and the short of it” accepted for publication in Review of Economics Studies